It was a dark and stormy night…

This line is quite arguably one of the most famous clichés in all of literature. It’s become so cliché, in fact, that I would venture that most people can quote it and that few people know of its origins. Of course, when Bulwer-Lytton first wrote it, it wasn’t a cliché. The opening to Paul Clifford — a tale about a highway robbery set during the French Revolution — has an obvious purpose: to set the mood for the book.

Join me here as I disassemble this phrase and the sentence it’s a part of, and learn more about how to write an effective opener for your own story.

My latest interview with J.D. Kellner of The Wet Ink Project is online!

Find out more about the creative process and inspiration behind The Ravencrest Chronicles, Warriors of Understone, and some deep philosophical questions such as “Who would win in a fight between Legolas and Gimli?”

The wonderful folks over at World Anvil hosted a new competition in the month of January titled “A Family Affair.” The goal of this challenge was to write an article focusing on an important family for our worldbuilding projects.

My entry into the contest was “The House of Leopold“, detailing the ruling family of the Kingdom of Brisland. This is part of the world of Istaria, which I am developing for a future epic fantasy series tentatively called The Eternity War. I’m proud to announce that this article was chosen as the winner of the Premier League of the competition!

(All past competition winners during the year compete in a separate league so that more writers have an opportunity to win.)

There were a lot of wonderful entries, and in reviewing the other competitors during the month I honestly did not think I was going to win this one. I’d like to give everybody who entered the contest a hearty congratulations for all of the fine work that was done. I read about many amazing families throughout the month and was amazed at the quality of the articles produced.

So as to not hog the spotlight, I’d also like to help spread the word about all of the other awards and accolades announced for A Family Affair.

Again, congratulations to everyone who won one of the above awards, made the short-lists for consideration, and to the writers of every entry for putting the work into creating something new and amazing to share with the world. As far as I’m concerned, you are all winners too because you’ve made progress on your projects.

Today was the official awards ceremony from World Anvil for their annual World Ember event (see my article on this here.) My own work in the challenge was in the short-lists for seven different categories, and I placed in four of them! I’d like to share the results here, along with links to the articles so you can head over and take a look.

(You do not have to be a member of World Anvil to view the content, but membership is free if you think you’d be interested in using the service! Affordable Guild Memberships provide additional benefits, as well! I’m a proud Guild Member!)

The settlement template on World Anvil is used for creating anything from a small village to a bustling city, or even a planetary colony!

My article about the city of Northampton won first place in the Settlement category! This is part of my Istaria setting – being developed for an upcoming epic fantasy series called The Faewylde War.

The city of Northampton is the capitol of the Duchy of Northampton and one of four major cities in the Kingdom of Brisland. Of the four, Northampton is the youngest. At the time of the Unification, it was actually the smallest as well. Currently, the city stands with a population of around 15,000 – made up mostly of peasant craftsmen – above average for a city of its stature.

The Organization template on World Anvil can be used for anything from a family to a governmental structure. I have used this quite a bit for kingdoms and religious organizations.

My article describing the Kingdom of Brisland was awarded second place in the Organization category. This is also part of Istaria, and a key part of The Faewylde War.

Brisland is a mostly agrarian kingdom that lies on the southern coast in the east of Istaria. It is bordered by Remaria to the West, Teugoras to the East, and Argastilan to the North. Protected to the north and west by mountain ranges and thick forests, Brisland enjoys a geographic isolation despite sharing its borders with three other nations.

The vehicle template on World Anvil might seem self-explanatory, but I’ve seen everything from wagons to spaceships, and even living creatures!

My K.O.B.O.L.D. article took second place in the Vehicle category. This is part of a DieselPunk project that I am co-authoring with Enkelli Arn Robertson, and will soon be presented in an anthology of short stories and novelettes called Tales From the Breach.

The Ko.B.O.L.D. (Korvonium-powered Battle Ordinance Load Distribution) series of Powered Armour was developed at the Peren City Institute of technology in response to the creation of the Operator Guided Robotic Engine (O.G.R.E.) by the Tannenholtz Empire. The KOBOLD armor consists of a core exoskeleton powered by a Sky Crystal-enhanced diesel engine.

World Anvil’s Technology template allows one to explore any sort of artifice from smelting iron to faster than light travel.

This article detailing sleeper ships – or interstellar ships where the crew and passengers are put into hibernation during a long journey – took second place in the Technology category.

To avoid the problems of having a crew spending fifteen years or more on a ship – which include psychological repercussions, needs for habitation space, and systems for renewable supplies of food and water – systems of chemically induced hibernation were developed. With these methods, the crew might pass the years as if one were passing an afternoon with a short nap. Naturally, the process and physical results were much more dramatic than this entails; but the passage of felt as instantaneous as this analogy implies.

The Ethnicity template on world anvil provides the opportunity to define groups of people from all sorts of origins.

My article about the Bravani placed third in the Ethnicity category. This is another part of the Istaria project, to be featured in The Faewylde War series.

The Bravani are a nomadic people who live deep in the forests of Remaria. Their history is older than the Principality itself, and they lay claim to being the original inhabitants of the region. They live a simple life, travelling the forests and occassionally trading with those who live in the Remarian coastal plains.

Again, I would like to thank the team over at World Anvil for creating an amazing platform for the community to develop and share their worldbuilding. There is also a thriving Discord community, a YouTube channel, and weekly Twitch streams in addition to the website itself. World Anvil really is an amazing community on top of being an amazing creative platform. I highly recommend it to any worldbuilder, and even those who are just organizing thoughts for an upcoming RPG campaign or writing project. You may be surprised how much your imagination is sparked just by dipping your foot into the waters.

The next wave of Ravencrest books are coming up in the second half of 2019. Unlike the episodic nature of the first wave – which focused on introducing key characters and the setting – the second wave will be a serialized epic told over the course of four novellas.

A mysterious cult has infiltrated every part of Seahaven, from the most respected nobility all the way down to the dockworker’s guild. Gareth leads the charge in unraveling this dark conspiracy, joined by friends old and new.

Keep an eye out for more information about Midnight Masques, Tapestry of Lies, Cult of the Shadow Queen, and Upon a Black Wing, all coming in 2019!

His first title with Kyanite Publishing LLC, “Night Shift,” is a science fiction story about a detective in the fictional city of New Angeles. Readers familiar with the science fiction subgenre called “cyberpunk” will appreciate the crime-ridden, dystopian setting. “Night Shift” was originally a serialized story Mr. Bass released online. He’s especially fond of serials and novellas that can be collected into longer works because they’re sized for today’s busy audience.

Night shift is available directly from Kyanite Publishing, or on Amazon, Kobo, and Barnes & Noble.

More information about Night Shift can be found at bkbass.com and Goodreads.

In New Angeles, crime is part of the daily business of running the city. But when a routine murder investigation starts turning up more questions than answers, homicide detective Harold Peterson finds himself unraveling a decades-old conspiracy that leads him to the highest echelons of the mob and the city government. As various threads start to come together, the big picture is revealed to be more than he ever bargained for. As bullets start to fly from both directions, the only thing Harold knows for sure is that he isn’t being paid enough to deal with this.

Check out B.K. Bass’ latest editorial project:  Remnants!  Based on the world created by Stephen Coghlan, Remnants is a shared-world project with an open invitation for authors to submit their own stories to compile an anthology!

I had a new interview go live today!  Check out my unconventional conversation with the witty and talented Claire Buss! A Slice of Cake With B.K. Bass

Our article on the ‘Punk genres, such as cyberpunk and steampunk, is now availbable.

Like a mechanical octopus rising from the deep, the various ‘punk genres of speculative fiction can be surprising, amusing, and frightening!  The ‘punk genres often blur the lines between different types of speculative fiction.  They also share a lot of common themes, such as antiauthoritarianism and disestablishmentarianism.  The commonality of these themes is largely responsible for the use of the word “punk” in their names.  The views expressed in early cyberpunk works – which birthed the entire movement – reflected those of the punk subculture of the 1970’s and 1980’s. 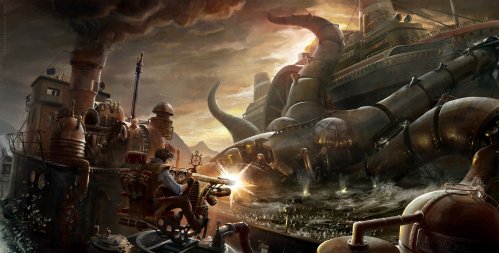 Also, don’t forget to check out my articles exploring the history and sub-genres of fantasy literature HERE, and be sure to follow the page and myself for updates on my upcoming series on the science fiction genre! 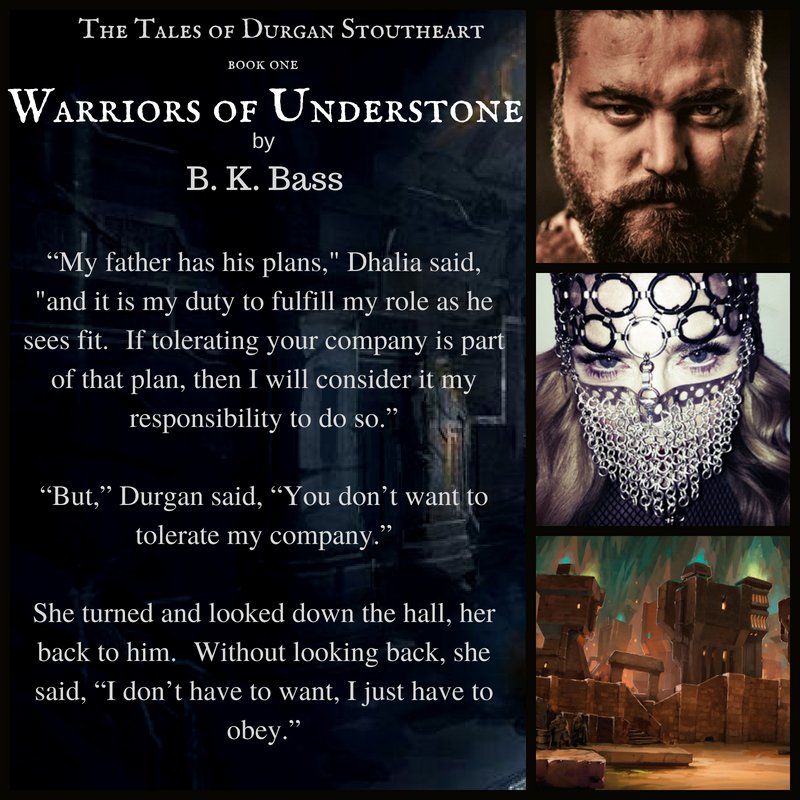